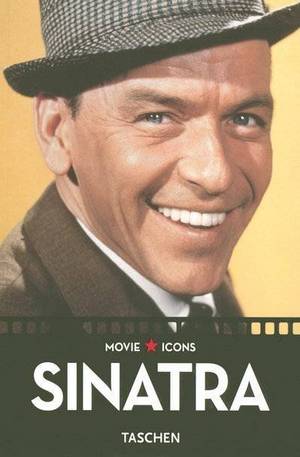 Long before he was Chairman of the Board, Frank Sinatra was a child of the jazz age and its free-wheeling approach to life. In the course of a meteoric rise from singing waiter to the worlds first pop star, Sinatra relied on his own version of keeping it simple: "Im not one of those complicated, mixed-up cats. Im not looking for the secret to life or the answer to life. I just go on from day to day taking what comes." As an entertainer Sinatra was both a visionary and a pragmatist, a prototype for the 20th century, who realized in the end that "You only live once, and the way I live, once is enough."In the "Movie Icon Series", people talk about Hollywood glamour, about studios that had more stars than there are in heaven, about actors who werent actors but were icons. Other people talk about these things, "Taschen" shows you. "Movie Icons" is a series of photo books that feature the most famous personalities in the history of cinema. These 192-page books are visual biographies of the stars. For each title, series editor Paul Duncan has painstaking selected approximately 150 high quality enigmatic and sumptuous portraits, colorful posters and lobby cards, rare film stills, and previously unpublished candid photos showing the stars as they really are. These images are accompanied by concise introductory essays by leading film writers; each book also includes a chronology, a filmography, and a bibliography, and is peppered with apposite quotes from the movies and from life.More bang for your buck! "...a fast-food, high-energy fix on the topic at hand." - "The New York Times Book Review".