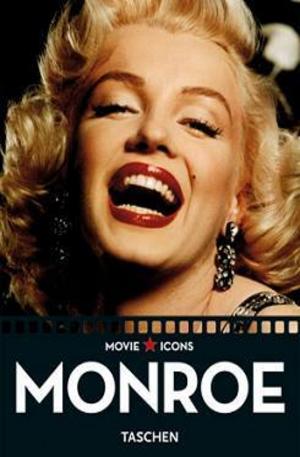 The iconic bombshell "Forget everything you think you know about this person," Elia Kazan cautioned, in his autobiography. The icon we cherish under the name Marilyn Monroe was in truth the inspired creation of a smart, voluptuous, star struck and self-motivated fantasist named Norma Jean Mortenson. A pure product of Hollywood, she abides across time as brightly as two other self-inventors, Charlie Chaplin and Cary Grant. Few things make an afterlife blaze more mythically than a sexual reputation—ask Cleopatra. Norma Jean paid a huge price to become Marilyn, yet here she is—still setting the bar high for all other would-be goddesses. The Movie Icon series: People talk about Hollywood glamour, about studios that had more stars than there are in heaven, about actors who werent actors but were icons. Other people talk about these things, TASCHEN shows you. Movie Icons is a series of photo books that feature the most famous personalities in the history of cinema. These 192-page books are visual biographies of the stars. For each title, series editor Paul Duncan has painstaking selected approximately 150 high quality enigmatic and sumptuous portraits, colorful posters and lobby cards, rare film stills, and previously unpublished candid photos showing the stars as they really are. These images are accompanied by concise introductory essays by leading film writers; each book also includes a chronology, a filmography, and a bibliography, and is peppered with apposite quotes from the movies and from life.