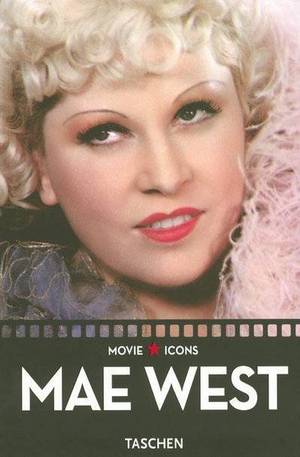 In terms of celebrity icons, few attained the highest levels of fame and controversy as rapidly as Mae West. Labeled a "pornographer" by censorship boards, she was also one of 1930s Hollywoods most lucrative box-office draws (causing "Variety" in 1933 to label the star "as hot an issue as Hitler"). Nicknamed by critic George Jean Nathan "the Statue of Libido" and paid homage to in the title song of Cole Porters musical Anything Goes, her voluptuous image and signature platinum blond air became recognizable worldwide and for decades beyond her prime years of fame in the 1930s. In fact, even by the 1960s when the Beatles wanted to use her image on the cover of their Sgt. Peppers Lonely Hearts Club Band album, those long-haired icons of a new generation were required to deliver a handwritten plea to the icon (which they dutifully did), since West herself always objected, as she said, to belonging to any "lonely hearts club."In the "Movie Icon Series", people talk about Hollywood glamour, about studios that had more stars than there are in heaven, about actors who werent actors but were icons. Other people talk about these things, "Taschen" shows you. "Movie Icons" is a series of photo books that feature the most famous personalities in the history of cinema. These 192-page books are visual biographies of the stars. For each title, series editor Paul Duncan has painstaking selected approximately 150 high quality enigmatic and sumptuous portraits, colorful posters and lobby cards, rare film stills, and previously unpublished candid photos showing the stars as they really are. These images are accompanied by concise introductory essays by leading film writers; each book also includes a chronology, a filmography, and a bibliography, and is peppered with apposite quotes from the movies and from life.More bang for your buck! "...a fast-food, high-energy fix on the topic at hand." - "The New York Times Book Review".