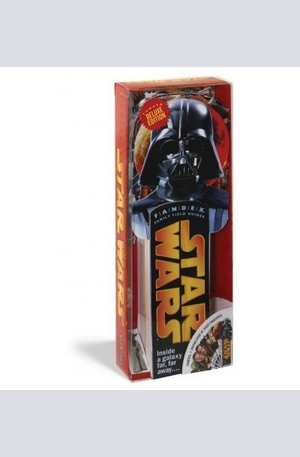 Sure, everyone knows that Darth Vader is Luke Skywalkers father, but how many people really know the secret of Darth Vaders paternal lineage? Everyones heard of Jedi Knights such as Obi Wan Kenobi and Mace Windu, but what about Plo Koon, Ti Shaak, and that snake-haired blue lady - what was her name? We know what a Wookie is and looks like, but what kind of creature is Yoda? Who built the Death Star? Whats the difference between a Storm Trooper and a Clone Trooper? Who is Queen Amidala, and why does she look just like her handmaiden Padme? Why are there only two Sith lords at any given time? Did Boba Fett die in that desert pit or not? How many languages can C3PO speak? Who is emperor Palpatine, and whats his relationship to Darth Sidious? And what, for heavens sake, is the Force anyway?"The world of Star Wars" is full of questions like these, and though any die-hard fan can answer them - and just about every twelve-year old boy with access to a TV set or a an X-Box - most people are a little foggy on all the details beyond the basics. For moms and dads who would like to make heads or tails of the Star Wars universe, for kids who cant get enough of it, for 20-something year olds who dont remember a time before Star Wars, for the avid, rabid collectors of everything Star Wars, and for anyone who still feels a nostalgic tingle whenever they see the opening line, A long time ago, in a galaxy far, far away..."Star Wars: Fandex Deluxe" will be a fun, handy, and indispensable guide to the universe created by George Lucas.