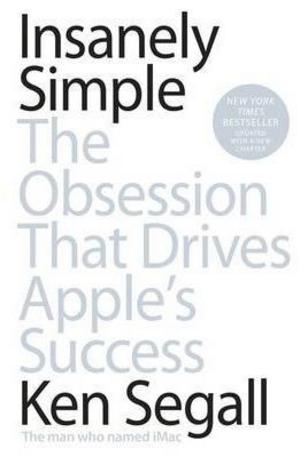 Ken Segall put the i in iPad. Now he explains why simplicity is the secret of Apples success in "Insanely Simple". To Steve Jobs, Simplicity wasnt just a design principle. It was a religion and a weapon. The obsession with Simplicity is what separates Apple from other technology companies. Its what helped Apple recover from near death in 1997 to become the most valuable company on Earth in 2011, and guides the way Apple is organized, how it designs products, and how it connects with customers. Its by crushing the forces of Complexity that the company remains on its stellar trajectory.

As creative director, Ken Segall played a key role in Apples resurrection, helping to create such critical campaigns as Think Different and naming the iMac. "Insanely Simple" is his insiders view of Jobs world. It reveals the ten elements of Simplicity that have driven Apples success - which you can use to propel your own organisation. Reading "Insanely Simple", youll be a fly on the wall inside a conference room with Steve Jobs, and on the receiving end of his midnight phone calls. Youll understand how his obsession with Simplicity helped Apple perform better and faster.

"A blueprint for running a company the Steve Jobs way ...should be required reading for anyone interested in management and marketing".

"Punchy...Segall gets inside Apples branding and marketing to explain its directness and power".

Ken Segall worked closely with Steve Jobs as ad agency creative director for NeXT and Apple. He was a member of the team that created Apples legendary Think Different campaign, and hes responsible for that little "i" thats a part of Apples most popular products. Segall has also served as creative director for IBM, Intel, Dell, and BMW. He blogs about technology and marketing at kensegall.com/blog, and has fun with it all at scoopertino.com. Follow Segall on Twitter: @ksegall.