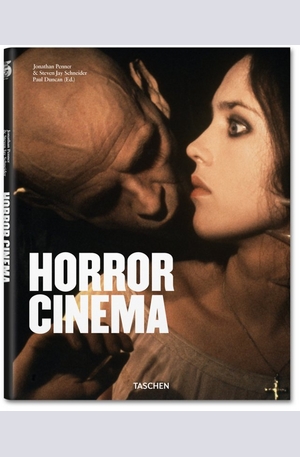 The authors:
Jonathan Penner has written for movies, television, magazines, and blogs, and has worked extensively as an actor, screenwriter, and producer. His film credits include the cult classic The Last Supper, the Hamlet-inspired Let the Devil Wear Black and the short film for which he was Oscar-nominated, Down on the Waterfront.

Steven Jay Schneider received his MA in Philosophy from Birkbeck College, University of London, and is a Ph.D candidate in Cinema Studies at New York University. He is the author or editor of numerous books on film.

The editor:
Paul Duncan has edited 50 film books for TASCHEN, including the award-winning The Ingmar Bergman Archives, and authored Alfred Hitchcock and Stanley Kubrick in the Film Series.

The best scary movies of all time
Horror is both the most perennially popular and geographically diverse of all film genres; arguably, every country that makes movies makes horror movies of one kind or another. Depicting deep-rooted, even archetypal fears, while at the same time exploiting socially and culturally specific anxieties, cinematic horror is at once timeless and utterly of its time and place. This exciting visual history, which includes unique images from the David Del Valle archive, examines the genre in thematic, historical, and aesthetic terms.